ACTOR LEE YI-KYUNG SAVED THE LIFE OF A ‘SUICIDER’ 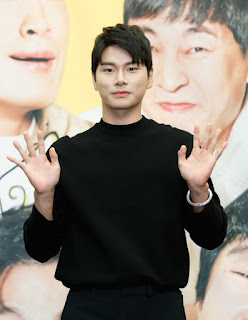 Actor lee Yi Kyung saved the life of someone trying to commit suicide.
It was reported that the person had tried to throw himself into the path of a moving truck.  fortunately,  the truck stopped just in time but the citizen continue to walk towards the other moving vehicles until actor lee Yi Kyung restrained him.
A witness confirmed that the truck driver had tried to stop the citizen, and lee Yi Kyung who was in the vehicle behind the truck came out and assisted in the truck driver in preventing the drunk citizen from causing more harm.

The drunk man had tried to jump into the river but was unable to because of lee Yi Kyung who later gave the man his coat when he was shivering.
There were other cars and spectators there but only lee Yi Kyung had the courage to step out and give a hand.

Actor #LeeYiKyung has saved someone who was trying to commit suicide. The person attempted to throw himself in front of a moving truck, even tho the truck was able to stop he still continued to walk towards the other cars until LYK stopped him. pic.twitter.com/34f9Vl0tHk

His courage has indeed saved a life.
Tell me, what are your thoughts?